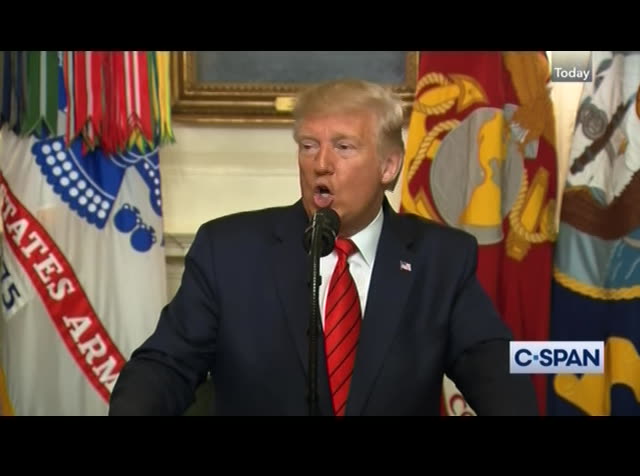 she was there to help people and he saw her and thought she was beautiful. and he brought her into captivity for a long period of time and then he killed her. he was an animal. and he was a gutless animal. thank you all very much. i appreciate it. very great day for our country. >> just before the news conference we learned more about isis leader al-baghdadi from this morning's washington journal. >> let's begin with the news. what do you make of killing of this isis leader, who is he and why is it important? abu bakr al-baghdadi is the chief of isis. he's a long time mastermind and he has been a long time nemesis of the united states and its
11:32 am 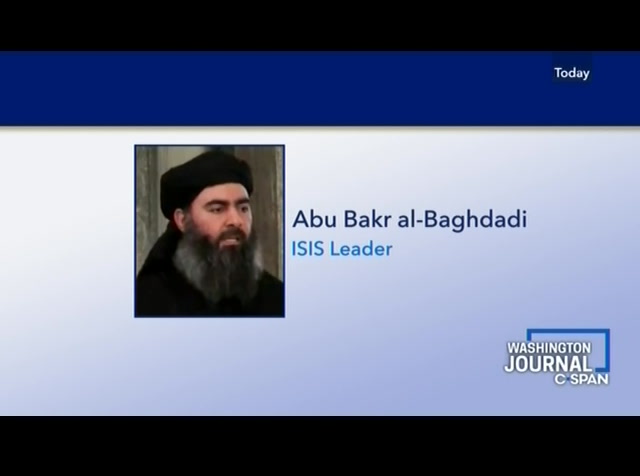 allies. this raid against him and the confirmation that it is him that was killed in the raid would be a big blow to isis but the organization will continue to present a threat not only in the middle east but abroad particularly because it's an extensive attack network of operatives in europe. host: where do we believe he was killed? guest: he was killed in a small village in northwest syria very close to the turkish border. syria is known as a long time smuggling route into and out of turkey and controlled by various factions of syrian rebels, many of which are tied to al qaeda. host: how did he get there? do you think? what does that say about who might have known where he was and do you think he was there this entire time? guest: right now there's a delicate dance being done between the united states and turkey. the turks have said that baghdadi and his family were in transit and that they'd only been in that part of syria for
11:33 am 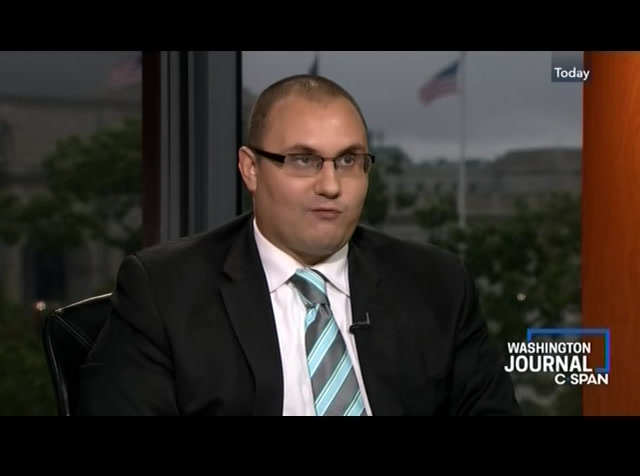 48 hours, which means he would have went several hundred kilometers from eastern syria all the way to far northwest syria. the u.s. however, and iraqi and our local partners, the syrian democratic forces coalition whom we work with in eastern syria are all saying it had been a multimonth process of vetsing where abu bakr al-baghdadi was and was a series of raids against his associates and close supporters that gave the actionable intelligence he had been hidden in this part of syria which is managed by turkey for several months. this is a very important point that needs to be discovered by the united states because if abu bakr al-baghdadi had been sitting in a safe house near the turkish border how could turkish intelligence not have known he was there. host: what's the importance of that? guest: it would an bombshell for the turkey-u.s. relationship.
11:34 am 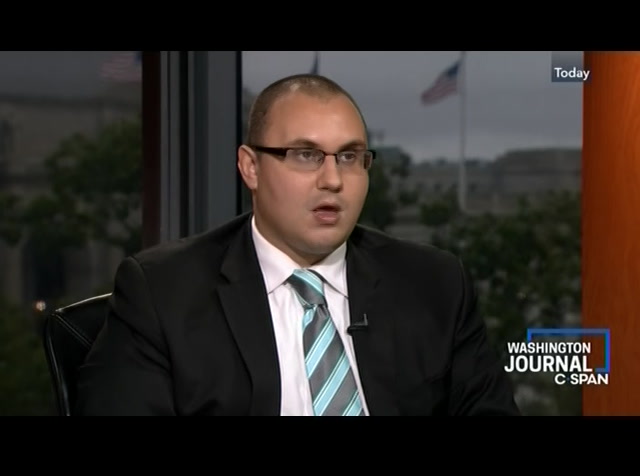 turkey is under fire for its invasion of northeastern syria which led to hundreds of thousands of people, probably more than 300,000 people being displaced from their homes and over 200 civilians being killed. that invasion into syria threatened the contra isis fights we've been waging with our partners, the syria coalition and there are incredible concerns war crimes, specifically ethnic cleansing of kurds are being done by turkish backed forces and would be a massive blow to turkey's attempts to try to recuperate its losses it suffered over the last three weeks in terms of global opinion. again, moments away here from president trump addressing the nation from the white house on this news that the united states and special operations raid has killed the top isis leader. we'll continue to talk here to nicolas until we see the president come out. mr. baghdadi detonated a suicide vest before he could be
11:35 am 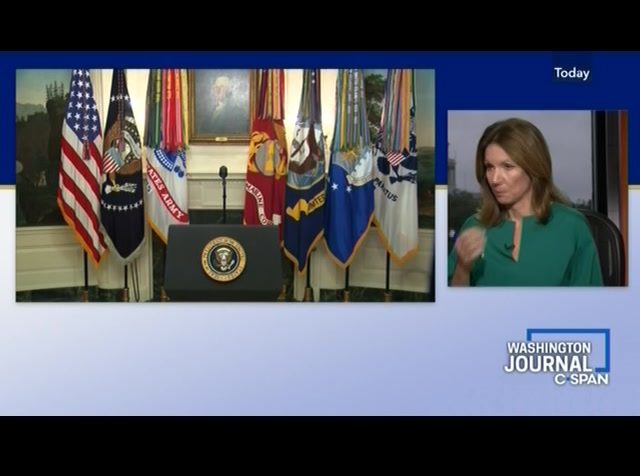 killed by u.s. special operations. why? what does that say to his followers? guest: it is a massive symbol. he's trying to say he isn't osama bin laden. osama bin laden was captured, executeded and put to burial at sea essentially under islamic rights. abu bakr al-baghdadi is sending a different signal, grittier and a more significant signal, which is you won't get me alive and all my followers don't kneel. die fighting. host: how many followers are there of baghdadi and isis in general? guest: isis is now a global organization composed of several local affiliates, there are isis affiliates in syrian iraq and yemen and afghanistan and pakistan, in western africa, in southeast asia. and isis has an attack network of operatives in europe. there may be more than 70,000
11:36 am 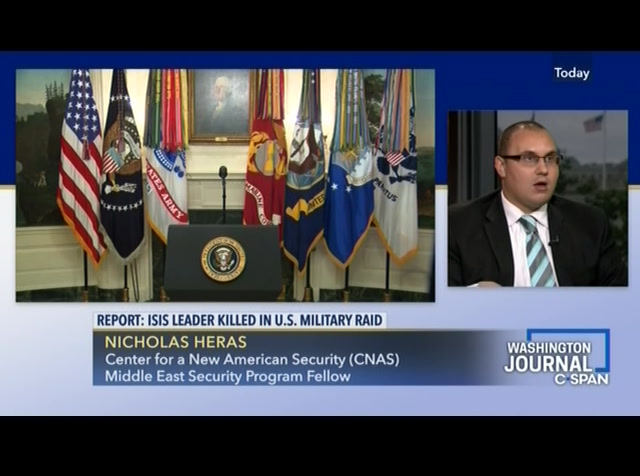 isis fighters globally with the largest concentration being in syria and iraq, probably anywhere between 20,000 and 30,000 fighters and perhaps hundreds if not thousands of operatives in europe. host: who will take over for baghdadi? guest: the chain of command is still to be seen. most likely what will happen is because isis at its core is composed of iraqi figures that another iraqi who comes back from the old case of al qaeda and iraq will assume the leadership of isis. it's important to point out although isis sort of raised itself from iraq and created this would-be califf eight -- cal fate -- caliphate in the united states, it's the fact isis as a brand can impact people globally and represent as do it yourself type jihad in many ways it's both an organization with a strong command and control and leadership but also leaderless
11:37 am 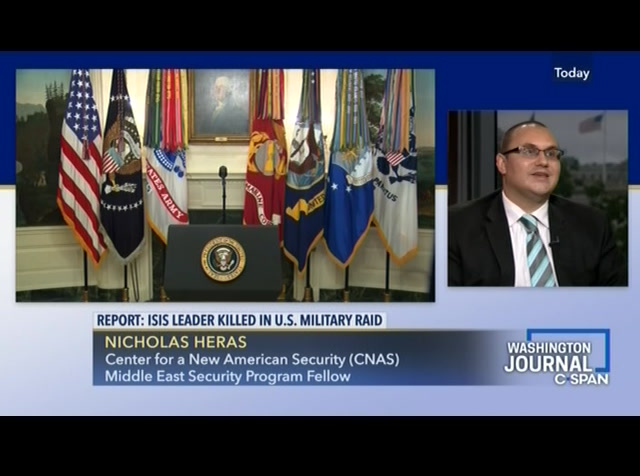 type of organization which makes it very difficult to counter. host: what does it say about the president's decision just weeks ago to withdraw u.s. troops from syria? guest: i'll give president trump the benefit of the doubt at this point. what it shows is that so long as we have strong partnerships, whether with state actors like iraq or nonstate actors such as the syrian democratic coalition, we can develop the intelligence necessary to act decisively which we did with our fores. the challenge now is it the u.s. withdraws fully from syria, which it doesn't look like it will but with reduced presence, how do we continue to maintain the confidence in our partners to be able to carry out these operations moving forward? >> senator lindsey graham in south carolina was in the pl
left
right
Borrow Program
tv

Center for a New American Security's Nicholas Heras discussed the geopolitical fallout from the U.S. withdrawal from Syria.